21 hours of bus/taxi rides, flight delays and airport queues lead us from the tropical paradise of Fiji to the utopian metropolis of Hermosa Beach, California. It was like stepping into the set of a Baywatch episode; sunny with beautiful white sand beaches complete with row after row of beach volleyball nets, a beaut concrete walkway that ran adjacent to the beach, lifeguard towers every few hundred metres.. I expected to see Mitch and Pamela jogging down the beach at any moment with rescue tubes in tow. Alas, the search for Pamela continues =(

Hector and I were staying in Surf City Hostel; a backpacker's joint right on the beach in Hermosa. When we arrived in the late arvo we were frothing to get in the water and get some waves, it was only 2 foot but still a few fun ones to be had. This was no Fiji however, the water was cold, murky, and laden with all sorts of plastic, paper and general rubbish.. it was filth! I was trying my hardest to keep my mouth shut when duckdiving!!


We got a taste of LA crime early on in the piece; Hector was walking towards the door of our room (which had been locked when he left) and saw that it had just been swung open - it was actually still moving. Around the same time he saw some guy making a hasty exit down the hallway. He figured I must've unlocked the door and been in the room already... and when he saw I wasn't there he put two and two together.. that mother 'ucker had been 'ucking with our shi'! It was too late to give chase - the guy would've been long gone. I arrived moments later. He would've been the most sorry crim' in the whole of California had we caught the bastard in our room!!


Our initial response was full blown panic - our wallets, passports, cards, everything of value had been right there out in the open. A quick check over and nothing appeared to have been taken, we figure he must've heard Hec's footsteps just after getting in an wisely decided to bail emptyhanded. We definitely used up a Get Out of Jail Free card then - a good lesson not to be complacent (it was the first time we let our guard down on the trip and it was only for such a brief moment!).

Right below our Hostel was a bar called Waterman's; a surf themed bar playing surf vids on the screens, and cranking out tunes from Sublime, Bob Marley, The Red Hot Chilis etc. The food was epic too.. cheap and good fresh healthy meals.. All of this combined with a few Longboard Lagers and I was pretty much loving life. There were a heap of other bars in the area that we checked out.. one thing that I struggled with was the mandatory tipping culture.. If you don't tip you're basically giving the bar staff the middle finger and they won't serve you again! We met some really cool locals while out and about.. everyone was really friendly and there was a good vibe when you went out. And for the morning: the super cheap Rise n Shine breakfast and bottomless champagne or mimosas for an hour! 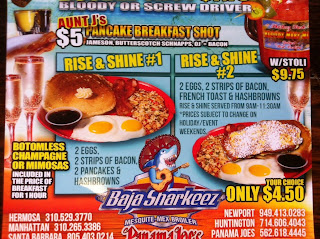 My kiwi mate Sam and his beautiful Brazilian wife Silvia live in Hermosa, it was really cool to catch up with them when I was there. Silvia is due to give birth soon, and I just happened to be there when the baby shower was on. Sam asked if we'd like to come along and promised there would be some amazing seafood BBQ action going down (he works for a company that markets and distributes fresh seafood including a heap NZ seafood). We went out to his boss' place right up in the Hollywood hills where his wife and maid had prepared an amazing spread of seafood; NZ snapper ceviche (raw marinated fish), and fish tacos with a choice of BBQ'd halibut, wild Alaskan salmon or more NZ snapper, along with a million other fillings made for the best feed I'd had for a long time, and good company to boot. Oh and the dessert was all time! 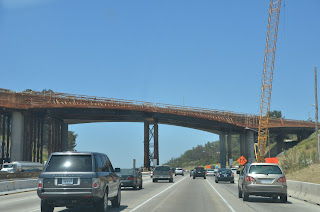 ^Pretty sweet formwork (sorry the engineer in me had to do it!) 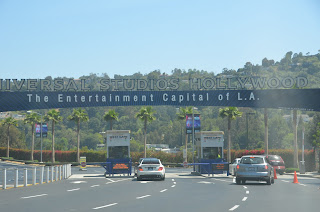 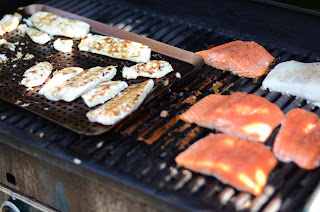 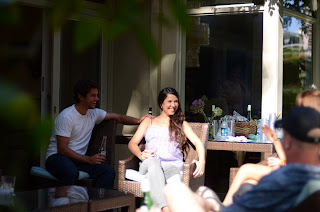 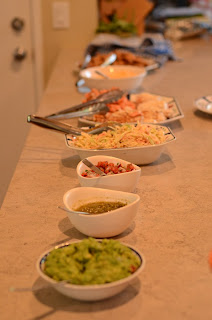 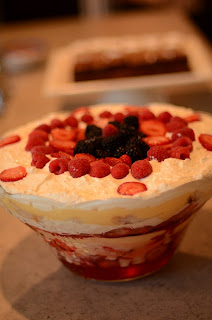 Birchy (Sam) took me to Trestles for a surf on the Sunday (Hec was a little too hungover haha). I was stoked to get the chance to surf such an iconic break. He picked me up early, I armed myself with a Latte Grande from Starbucks, and we did the 90 minute mish to Trestles. When we got there and he mentioned the word 'wetsuit'.. my heart sank - mine was still hanging up in the room of our hostel!! It was a cold and grey day already but determined to actually get a surf I decided I'd hit it in boardies and see how long I lasted.. 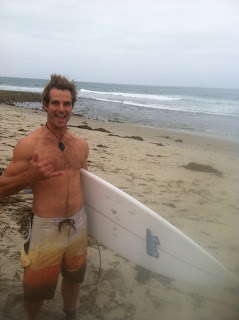 It didn't look too promising as everyone else in the water had a full length steamer and some even had booties on! Ah well I might as well reinforce the crazy Kiwi image and paddle out. I completed the 'Five Wave Challenge' that Sam set with ease and actually lasted almost 40 mins before the shivering got too much! It wasn't the best Trestles but still good fun... It would be amazing on a good day.


We hired a few cruiser bikes (it seems that every bike in Hermosa was a cruiser)
and did a bit of shopping on our last day in Cali. Mine was a real dud.. the chain fell off about fifteen times throughout the day, and with these bikes the ol' backpedal brake is the only means of stopping, of course when your chain has fallen off it leaves you brakeless.. had a few hairy moments including narrowly missing a brick wall and almost taking out a pedestrian!! The crazy thing was how chilled out the Californians were on the roads.. they have so much patience with pedestrians and cyclists (even the ones who temporarily forget they're meant to be driving on the RIGHT hand side of the road haha!). 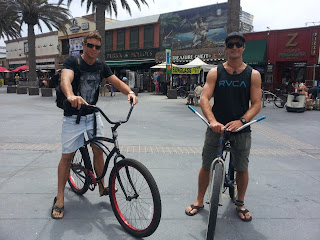 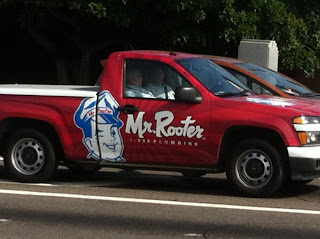 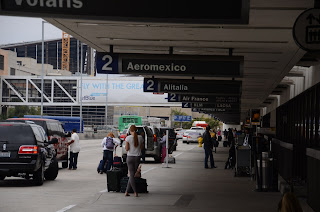 The flight from LAX to San Jose was via Mexico city.. I've flown into a few big cities before but this was absolutely mind blowing.. the place is HUGE!! Mexico city area has 21 million people, and by the looks of things they like to cram them into a pretty tight area. There was some serious bust going down on the runway in the plane next to us.. policia and a heap of official looking dudes checking out the cargo.. bit of vid off the iphone below:

So we're in Mexico City airport and the lines are huuugggeee.. the bastard of a thing is that we have to collect our baggage from the carousel, take it through customs then check it in again. Our anticipated problems of traveling with surfboards are being realised as we're told our oversize boards need to go to line K2.. we eventually manage to find K2 and find yet another ridiculously long line.. The guys in charge only speak Spanish ad I'm trying my best to tell them that our plane is due to leave in 20 mins and we need to get the boards on the plane!! I eventually show my ticket to the right Mexican and he gives us the express lane treatment.


After all this stress we breathe a sigh of relief as our connecting flight is showing delayed on the screens... Hector goes off to find some internet as I go up to the info desk to find out how long flight seis-cinco-seis (656) is delayed for..
'Oh nooo, sir, your flight leave now.. you must hurry!'
Oh christ.. Hector's nowhere to be seen and I have visions of our luggage spinning around abandoned on some luggage carousel in Costa Rica waiting for some local baggage handler to give it the express route home! I make the call to bail so at least I can look after our gear.

I get to Costa and my stuff comes out but Hec's doesn't.. must've known he didn't board. I team up with Paddy and Soph, a couple from Sydney, who kindly offer for me to team up with them for a taxi to their hostel.


I manage to get internet there and find out Hector is on the next flight from Mex City to San Jose in Costa Rica. Easy. Or at least it should be.

Poor Hector is under the microscope from the Costa Rican authorities when he arrives the next morning as he missed his previous flight (I suspect they thought he was picking up some illicit cargo in Mexico City!).. they pull him up on the fact that he doesn't have an onwards ticket out of Costa Rica and won't let him into the country (this is technically a requirement but rarely enforced).

In his innocence, he grabs a few notes out of his wallet and says
'Let's go now and buy a bus ticket to Panama'.
Of course the dude behind the counter doesn't speak English and thinks he's trying to bribe him - even worse they have video footage that tells the same story!
Nek minnut.. Hector is with a full time security escort who doesn't speak a word of English and there's nobody around who does. Poor bugger is held there for 20 hours and his passport is stolen at some stage when he turns his back...Fortunately his passport shows up in lost property (WTF?!) and he has to catch a return flight to Mexico city.. They say that if he leaves the country he can get back in tomorrow no dramas as long as he has the ticket out of Costa Rica.


I'm still in San Jose, just another big noisy city in a tropical country and I need to get outta here! Today I got a taxi to the bus station and bought a ticket to Nicaragua for Hector. Sent him a copy so he can show it to the authorities and get let into the country .. hoping he gets through the customs this time around.. we're both hanging out for a surf!!!