Swiss army knives. The quintessential man-tool. Just ask MacGyver. Hitler's just damn lucky he didn't make it to Switzerland in World War II or he would have been fighting what was a whole country of MacGyvers. The Nazi's would've been screwed!

Turns out that aside from their knives, the Swiss have a lot of other things going for them. Perhaps the most endearing characteristic of the Swiss is their sense of community conscientiousness and national pride. If it’s the right thing to do, it will be done. You notice this straight away when you enter the country – everything just seems to be pristine and in perfect order. No rubbish on the streets, no overgrown vegetation, and the national flag flying from every second house.There's so much respect for not only the land, but other people and the rules in general. I think every country in the world could learn a thing or two from the Swiss.

A small village called Meggen (just outside of Lucerne) is our first port of call in Switzerland – my workmate Mark moved here a couple of years ago with his wife Silvie and two sons Tayne and Jai. Reserved for us is their ‘honeymoon suite’, aka the campervan parked in the driveway. We’re absolutely stoked with their kind offer and to have somewhere to stay in such a beautiful area. After a few hours on the train from Milan (which incidentally has amazing scenery), we’re greeted at the Lucerne train station by Mark and the boys. The boys are keen to give us the history of the local area and practice their English with someone other than mum and dad (they speak both German and Swiss-German at school and after a couple of years are now fluent in three languages, seamlessly switching between all of them in one conversation). 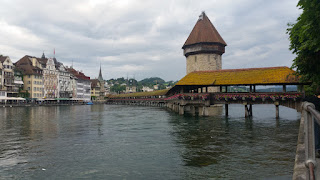 Mark has a long list of activities lined up and has kindly offered to show us around during our stay for the week. Weatherwise, our timing couldn’t be better. After a few weeks of rain and cloud, the weather forecast is for fine and sunny weather.

Day 1 involves a casual ‘walk up the hill across the lake’. Which is actually a friggen huge mountain called Mt Pilatus, which rises to 2,128m. Not sure what height we start at but after several hours of climbing I conclude that living in a small village surrounded by mountains has severely distorted Mark's perception of what constitutes a 'hill'. Although we’ve tried to do a bit of exercise during our trip to date, we haven’t had a good blowout like that for a long time and it feels great. Painful, but great. The views are incredible. 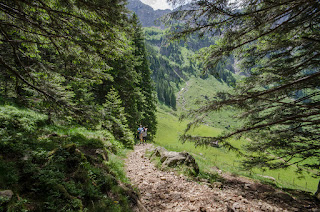 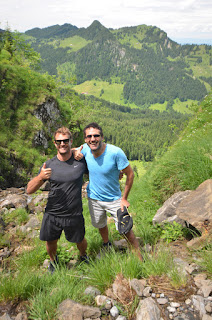 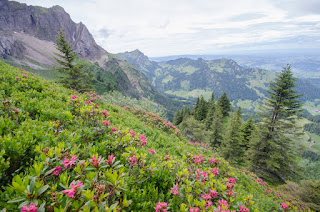 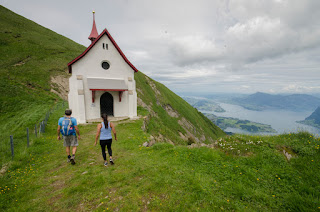 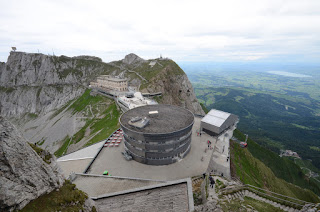 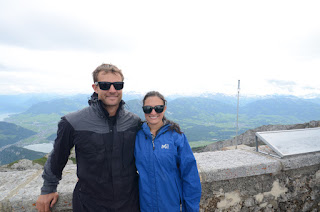 What is so unique here is that the mad Swiss decide that it's a great idea to build houses or buildings at the top of these. It's quite convenient for us as there’s a big bar/café right at the top where we get to have a well earned beer and feed (most people take the lazy option and take a train up there, incidentally it's the steepest cogwheel railway in the world). They also have a military base up which is a network of tunnels up on the top of the mountain - I'm not sure why they need a military base as I've always heard they're a peaceful nation. Probably where they keep the emergency stash of Swiss army knives.

We also see an Ibex, which is a kind of mountain antelope. Seeing one of these was on my bucket-list so I’m stoked. I took a few pics on my phone but they were so far away they just looked like pixelated brown smudges so this picture I found online will suffice. 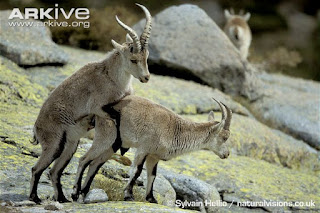 We take the opportunity to pick up some snowboarding gear while we're here - an outlet store has some ridiculous summer specials on, I pick up a jacket that's reduced to 100 Swiss Francs from the original 600 price tag! Em picks up some new snow pants that are equally cheap. Consider stocking up if you're around these parts during the summer months.

Day 2 we head up to the glacier on Mt Titlus, an even higher 'hill' at a mere 3,328m above sea level. Fortunately we catch the cable car up there but I suspect if Mark was here by himself he'd run up to the summit. Even though it's summer, the peak has just received a good dump of snow over the prececeding days and we get to give our new gear a test-run. Unfortunately it’s not open to boarding or skiing at this time of year but we hit up the snow park which is located at the glacier. It's a relatively small area but there are a heap of toboggans and stuff to play/injure yourself on. As it's the first time she's played in the snow, Emily is absolutely frothing! We have a blast and escape without major injury. Just. 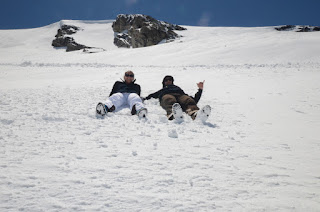 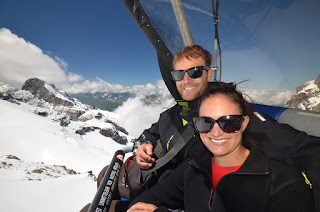 In typical Swiss fashion, there's a huge complex up at the top, with restaurants, bars and even a shop selling Swiss watches! To appreciate the feat, imagine this sitting at the summit of Mt Cook (NZ's highest mountain for those unfamiliar). Oh, and while you're up there, why don't you just casually carve a tunnel through a glacier for people to walk through and throw in a suspension bridge for good measure! 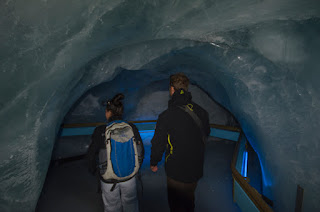 The days that follow are a mix of more cow bells, mountain biking (there are so many awesome downhill tracks around Lucerne), BBQs, and a climb up one of the 'via ferrata'.

The via ferrata deserves special mention. It's basically small lengths of reinforcing steel epoxied into the side of a huge cliff so that rookie climbers like me can climb them (with a harness on of course). I can't quite remember the height of the one we went up but I think it was in the order of 400 vertical metres. These are self-guided the one we went on is apparently for 'experienced climbers only'. Mark's been up a couple of times before which gives me a little comfort but I'm secretly hoping I don't freeze half-way up as there's no rescue on these things - once you've started you have to bloody finish as nobody can rescue you from up there! Fortunately I made it but must admit I looked down once and only once on the wire rope-ladder at the top! 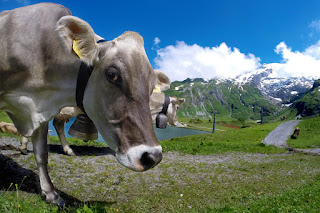 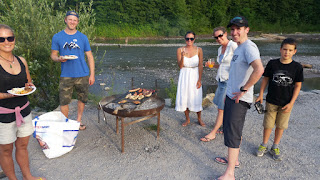 After the madness of Meggen, we head off to my Mate Stefan's place in a small village called Frutigen. I surfed with Stefan and his mate Andi in Chile a few years back, where they were appropriately nicknamed 'The Swiss Knives' by everyone at the surf camp. Stefan has just made the cut for the firefighters in Bern (aptly named). They only pick half a dozen new firefighters at each intake out of a couple of hundred applicants so he's killed it to make the cut! There's an open day at the new fire station and so we check that out en route. I wasn't sure what to expect but was blown away by the state of the art building and all their trucks and workshops. 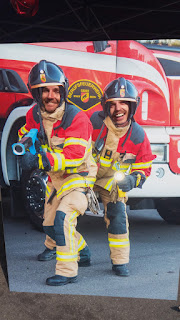 After the Fire station visit we head to a little lakeside bar with a giant inflatable mat floating in the lake – beside this is a scaffold tower you jump off, when you land the shockwave launches your mate in the air and (hopefully) into the lake. Stefan and I just need to sign a little disclaimer in case we break ourselves and we’re good to go. I draw the short straw and get to go first. Having never seen this before I’m a little unsure of what to expect. I’m trying to keep it cool but I know that any moment the guys are going to jump and violently launch me into the air. 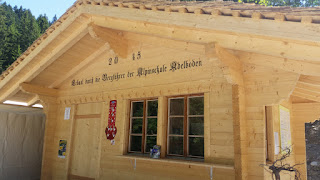 We head to Frutigen, where Stefan’s parents have kindly offered to have us around for dinner; a feed of Raclette. This dish consists of a huge block of cheese that you grill on one side (either beside a fire or the more modern version is an electric grill); when a layer of molten toasted cheese has formed you scrape it onto whatever vegetables (cooked or preserved) you want, add a bit of seasoning and away you go.


Simple but so damn good and it’s also a very social meal. The raclette is paired with a few beers and the Swiss fizzy drink Rivella, which tastes really similar to New Zealand’s L&P. The village is in a valley surrounded by lush green mountains with the typical postcard-perfect Swiss scenery. We’re eating outside looking over all this with great company and plenty of laughs. Definitely a memorable experience. 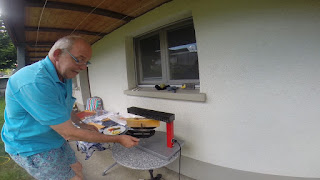 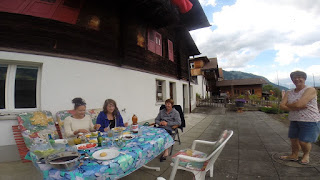 Stefan has to go away for work but lets us stay in his place so over the next couple of days. Just up the road are a number of cool pubs and restaurants so Emily and I check these out. The highlight is an amazing spot with a hotel & restaurant surrounding the most amazing blue lake (with an outdoor cinema screen centred in the middle of the lake!). In the lake are a heap of rainbow trout that they serve at the restaurant. There’s also an outdoor spa that you’re expected to go in naked. Seems a bit odd to us to be getting the wedding tackle out in front of complete strangers but Stefan assures us that it’s normal over here and people would wonder what’s wrong with you if you went in with boardies or a bikini on. We pluck up the courage and strip down to our birthday suits, only to find an empty spa with nobody else there! We can only imagine how awesome it must be in here in winter when it’s surrounded by snow with a beer in hand after a big day on the mountains. 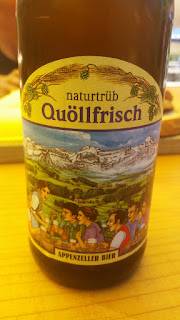 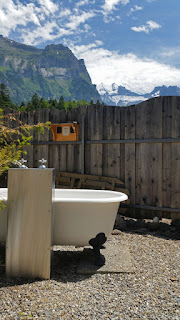 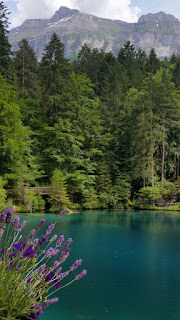 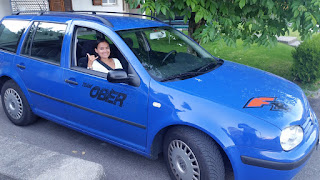 With a touch of sadness we say goodbye to Switzerland (and Stefan’s mum Anita who has dropped us at the train station). She's even brought us a couple of bottles of Rivella and some chocolate for the journey! We've had an epic time in both places, staying with the locals and getting away from the usual tourists traps - exactly what travel should be about in my opinion.