Great to see the family.

Yet to score any waves in Gizzy (though I'm not too worried after surfing myself silly on the Gold Coast).

Looking forward to spending some time in the South Island next week. Plan is to land in Chch then drive to South Westland where my mate Hector and I will either walk or catch a chopper up to the Southern Alps on a hunting trip chasing tahr. Not many people (even Kiwis) know what tahr are - simply put they're a goat on steroids. Originally from the Himalayas, they were first released at Mt Cook in 1904 as a gift from the Duke of Bedford in the hope of establishing a wild population in NZ for hunting purposes. Seemed to work pretty well - the population is around 8,000 animals these days, one of the main methods of population control to limit their numbers (and environmental damage) is recreational hunting; giving us an awesome excuse to head up into the mountains with bangsticks and basically go feral for a while.

They are incredible animals to hunt - a large part of the challenge is getting to within shooting distance without getting spotted, heard or smelt..no mean feat when they're living in steep and icy mountains. The weather is extremely frigid and changeable at this time of the year, but it's also the ideal time to hunt tahr as it's the rut (mating season). The dominant bull tahr in the area will round up a harem of ladies (nannies) and chill out with his girlfriends high in the rocky tops of the mountains in order to have his wicked way with them. This gives us a chance to bump into the big boys, who on the west coast are often hiding in the thick bush at lower altitudes for the remainder of the year. Tahr also happens to be one of the tastiest game meats out - beautiful dark and lean meat..not dissimilar to venison or kangaroo. Here's hoping for a good feed of backsteaks & hopefully a bit of diving & surfing in the mix too.

Random pic below of a morepork our cat brought in.. it was alive and seemed OK.. possible broken wing so we dropped it off to a bid sanctuary to nurse it back to health. 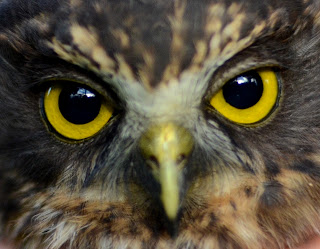