Fiji time... the term used to define the phenomenon of nearly everything running behind schedule in this super laid back country. Those of you who know me well will understand why I fitted in here perfectly! Quite fittingly, our plane from Fiji to LA was four hours behind time; a bit of an inconvenience but it left me with a bit of time to update the blog so it’s all good. Apologies to you non-surfers for the excessive use of surf lingo throughout this post ;-)

I was so stoked to fulfil the dream of surfing Fiji, a dream I’ve had since first watching Pat and Wingnut tearing the place apart on the old school surf flick The Endless Summer II.  It hasn’t really been on the cards until the past few years (since Frank Bainarama’s military regime overran the government here). Previously the only people allowed to surf the legendary Cloudbreak and Restaurants breaks were those staying on the extremely expensive resort on Tavarua Island. In fact, just before the military's coup, the exclusive rights to the break had just been extended another 29 years! Anyway, it was good news for us as we were able to stay at a cheap surf camp called Rendezvous on the main island, it was basic but still did the trick for somewhere to sleep. Cloudbreak is around a 40min boat ride from the camp, which was a surprisingly cold affair at times - if you ever go make sure you take a good wind & waterproof jacket!


On the second day of the trip we’re steaming our way out to Cloudbreak with high hopes: low tide, the wind is light offshore and the swell is forecast to build during the day..  the trip out there is filled with speculation as to what the day will bring; is the wind good? Has the swell kicked in yet? How big are our gonads today? Will we get back with boards and bodies intact?
The scene that greets us as we pull up to the reef is so far above and beyond our expectations it’s almost too surreal to comprehend.. the swell has well and truly kicked in. Eight foot sets are detonating on the reef, so clean and perfect, with barrels you could fit cars into. GULP... this is a slight step up from yesterday’s two foot session!  Almost more unbelievable is the fact that there are less than ten people in the lineup.. 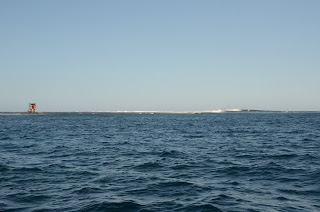 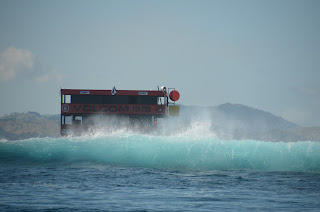 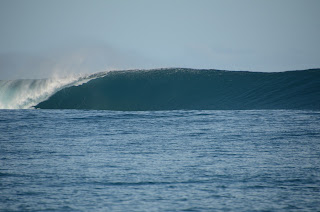 We watch from the boat as John John Florence takes off deep on a solid one.. no grab required as he weaves through the sickest and deepest backhand barrel I’ve probably ever seen, everyone in the channel is roaring at full noise. His barrel sense is absolutely freakish! 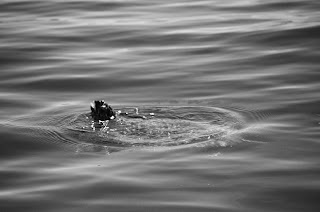 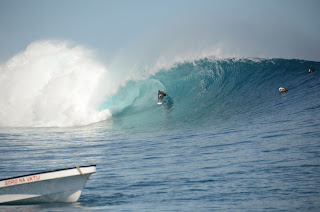 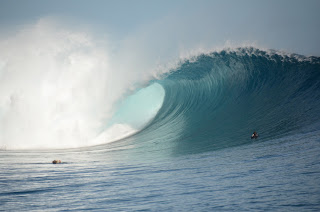 Adrenaline levels are sky high with the realisation I’m gonna have to man-up and surf this; time to wax up the trusty 6’9” rhino chaser and get stuck in.  Second wave I manage to sneak into a solid barrel; there is so much room inside these waves it’s almost a joke! To my relief I manage to escape the beast without destroying myself or my board. I manage a few more waves then the king himself, Kelly Slater, paddles out. He’s a friendly guy and is as frothing on these waves as we are! He proceeds to get barrelled off his shiny bald head with so much style and shows us all how it’s done. Pretty amazing experience to see the world’s best surfing one of the world’s best waves (on a day that even the pros were saying is the best they’ve ever seen it!).

The definite highlight of my trip is when Slater is on the inside next to me, a little too deep, and calls me into this wave which is one of those that you know is just going to hit the reef perfectly. I’m super deep myself but when Slater calls you in you aren’t exactly gonna wuss out and pull back are ya?! I set a good line and a huge section throws out in front of me and I’m waaay back in the barrel bouncing around on the foamball... the section keeps throwing and throwing and I’m still holding on... after what seems like an eternity this thing finally lets me out.. all the crew in the channel are hooting.. yep, definitely the best barrel of my life! 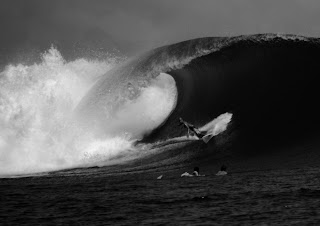 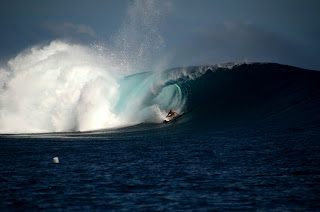 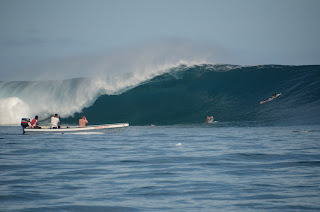 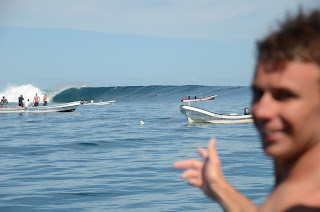 The arvo session at Restaurants was almost a joke it was that much fun.. the most amazing wave I've ever surfed.. fast long barrels and the most rippable end section. We were lucky to get this on as it needs a solid swell - guys can come here for several trips and never even get to see it breaking so we definitely had luck our side. 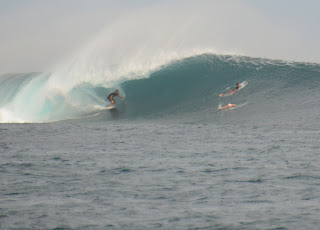 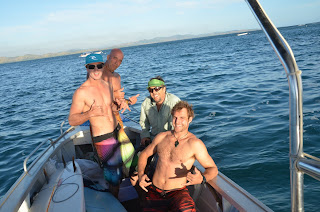 The next day is still solid but the wind is cross-shore and the swell’s all over the show. The lineup is understandably empty. First wave I get held up in the lip on takeoff and get absolutely drilled.. the washing machine morphs into the cheese grater as the beast of a wave pins me to the reef and drags me in all directions, scraping my back over the coral and leaving a fair chunk of my skin on the bottom! I manage to get a few more waves with my back on fire just to prove that it hadn’t got the better of me before retiring to the boat for the day. 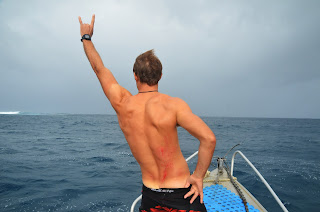 Over the next few days we had more surfs with Slater, Mick Fanning, Johnjohn Florence, Jack Johnson, Parko, Fred Pattachia, Taj Burrows and a handful of other pro surfers (they were all there for the Volcom Fiji Pro). The waves were still solid and good for the majority of the time.. a bit more skin was lost to the reef as well! 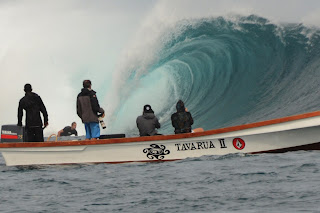 To escape the comp circus and get some uncrowded surf we head down to The Beachouse (cheap backpackers) on Saturday arvo on the express bus from Nadi.. we’re the only non-Fijians on what is a very crowded bus..  For the majority of the two hour bus ride I’m sitting next to Mary, a large Fijian woman, who unfortunately took up a fair bit more than her allocated seat width..  I was holding on for dear life around the corners to stop myself sliding off my half seat as our crazy bus driver tried to break the sound barrier. 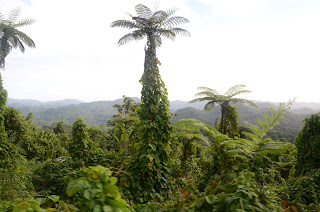 The next day we manage to head out to Frigates, which breaks on the same swell and wind as Cloudbreak, only it’s an exposed reef WAY offshore (took us well over an hour to get out there). The water directly adjacent to the reef drops off to around 60m, accordingly this wave has a huge amount of raw power. As waves approach you don’t get much warning; they hit the reef, a heap of water draws off and they stand up. During the surf I’m paddling back out near the end section and am confronted with an angry, growling beast of an eight footer, the arms are in overdrive and I know I’m going to get the beating of my life if this thing gets me. I'm the most scared I've been on the trip so far as the lip breaks a good metre in front of me. Miraculously, I manage to scrape under it and pop out the back! 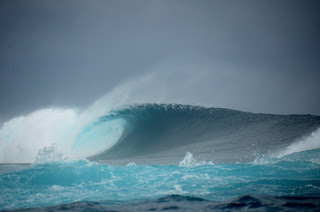 We managed to finish the session boards and surfers unscathed (no mean feat) and on the way home we checked out Yanuca Island, in this place there were dozens of massive bats flying around the bush laden cliffs.. it was really surreal.. it kind’ve reminded me of that scene from the Wizard of Oz with the winged monkeys.. Despite this crazy factor the place is the epitome of a beautiful tropical island – it was great on a grey day but on a sunny day it would be truly amazing. 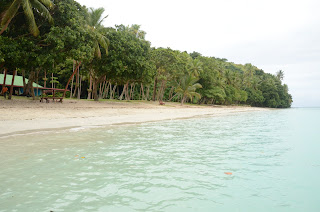 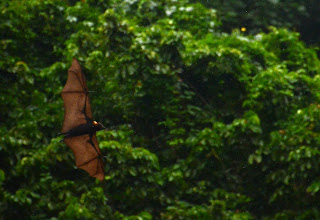 The next day was a surfing layday; I went out diving with sharks as I heard people come from all over the world to do this dive. I was pretty shit-scared but once I got in the water and saw the first few sharks I quickly realised they were much more interested in the big bins full of tuna than me! It was pretty nuts having huge bull sharks (around 3m long and dear god they were WIDE) coming to within arms length of us at times.. the highlight was the 12foot tiger that showed up - super lucky with this one as they hadn't seen a tiger for over three weeks. One of the Fijian dive guides showed he had a serious set of coco's by hand feeding a jumbo sized tuna to this massive shark. Check the video I made of this dive here:  https://vimeo.com/43378247

The main guide gave us a bit of background about the sharks around the place - interesting stuff. Unfortunately Fiji has been letting China come in and thrash the crap out of the fish in their waters (in exchange for money of course), a lot of illegal long-lining is also done close to shore in areas where they're not allowed but the authorities turn a blind eye.. The fish and especially shark numbers have, according to the numerous locals I spoke to, dropped considerably in the past few years. There is a huge demand for shark fin soup in mainland China and the sh*t is even showing up on menus in Fiji! It's a pretty sad outlook for Fiji's fish at the moment.

The next few days in Fiji were a blur of snorkeling, consuming too much Fiji bitter, surfing the fun little right in front of our resort on the high tides, unreliable internet connections, sunbathing and reading the Hunger Games trilogy in hammocks.. livin’ the dream! 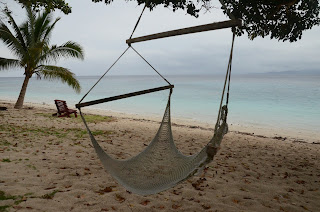 Already had a few days in Hermosa Beach, California. Such an epic place - will update soon.
Posted by Robbie Peck at 11:22