Chile - apparently not that chilly in mid-September...

I fast track my way through the Santiago airport with my Kiwi passport, evading the US$95 reciprocity entry tax that our less fortunate Aussie passport holders have to pay before they're allowed into the country (apparently the Aussie government charges Chileans when they enter, so they extend the same courtesy!!).

I take the bus into town for a little over $1USD and check into the most well known and arguably the best hostel in Santiago; La Casa Roja (The Red House). It's a really cool high ceilinged stone building, located in a slightly rough area of the city named Barrio Brasil. The staff are super helpful and friendly - we get chatting about the options for local skifields. I'm gutted to learn that my plans of piles of powder and snowboarding for a few weeks are thwarted by catching the tale end of what the locals are calling one of the worst snow seasons in seven years!

I'm a bit despondent, questioning why I didn't stay in Peru where the surf was pumping!!! Fortunately, I discover a local steakhouse just around the corner, Las Vacas Gordas (The Fat Cows) and attempt to drown my sorrows with cheap Chilean red wine and eating my body weight in flame grilled steak. After the ground-hog days of eating fish and rice in Peru I swear it's the best steak I've ever had! 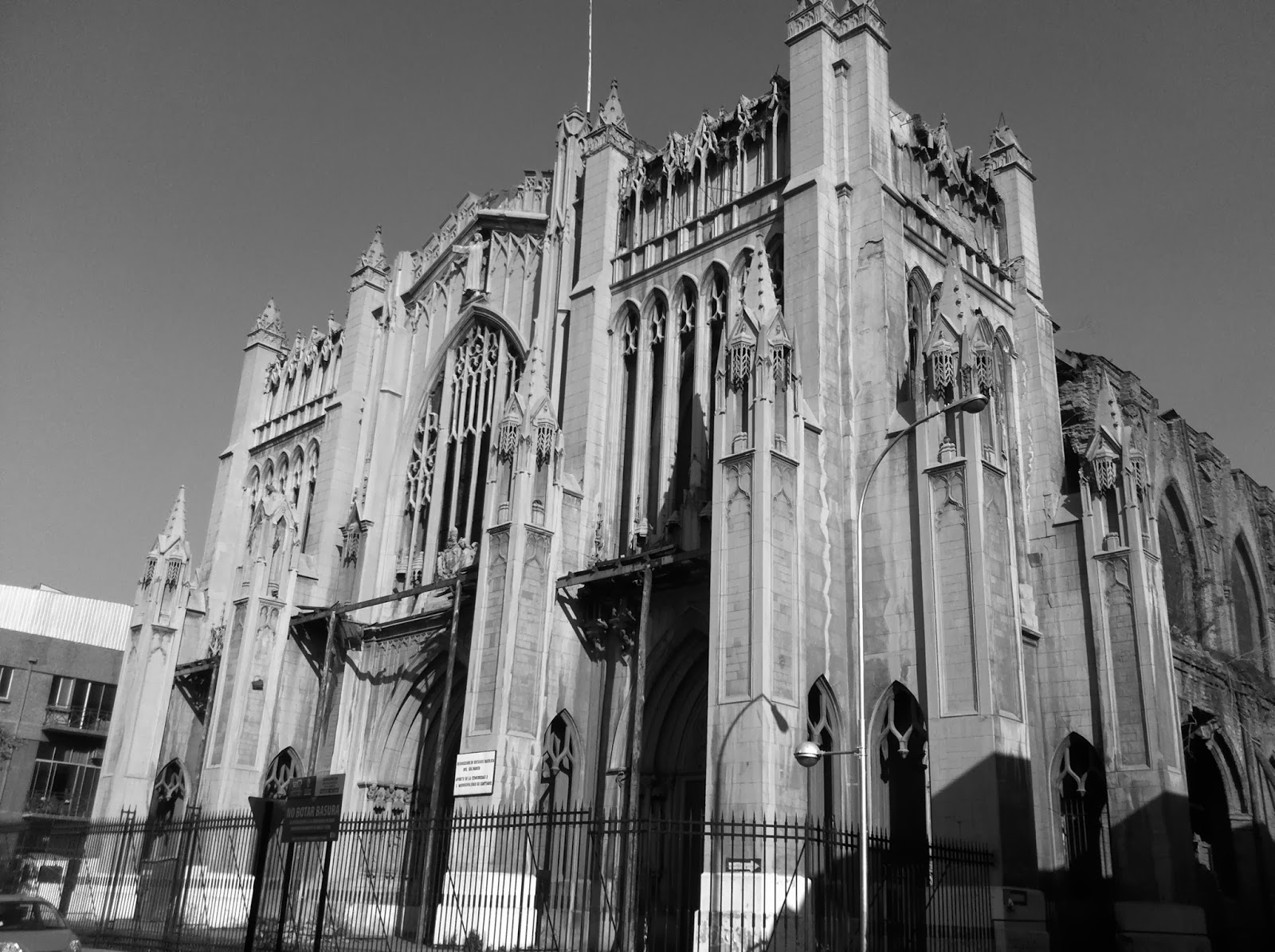 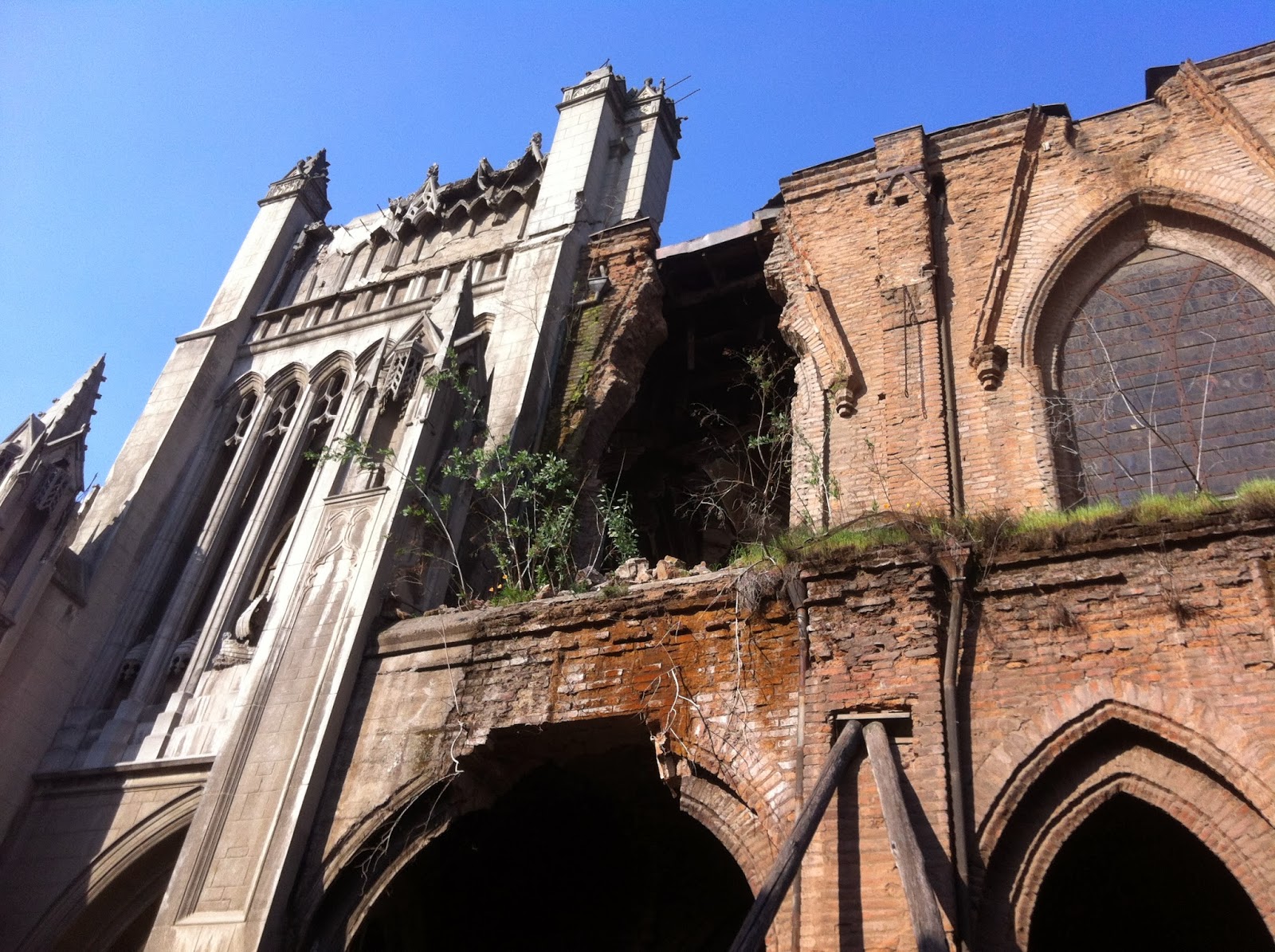 Churches damaged in the 2010 earthquake

The next day, I get chatting to a local Chilean by the name of Victor in my hostel about my newly formulated plan to hit up Pichilemu - (home to a few epic breaks including the famed Punta de Lobos). It turns out that I'd be shit-out-of-luck with that plan too as it's the 'Dieciocho' celebrations - basically a big party that spans a week centred around the 18th of September to celebrate Chile's independence from the Spanish Empire. For the Chileans, it's the loosest time of the year - around two million (or an eighth) of Chile's population head to the coast during this period so all of the buses to Pichilemu are booked out!
Victor just so happens to be heading down to Pichilemu in a car with his mate Felipe and they have a spare seat and even a spare tent for the campsite. Stoked!

We cram into Felipe's hatchback, where I cram myself in between the beer, boards, backpacks and bongo drums! An hour or so out of Santiago we pull up at a humble wooden shack selling food on the side of the road.. where I discover the Latin American equivalent to the kiwi meat pie - empanadas! They're basically a big tasty baked or deep fried pastry filled with cheese (lots of cheese!) and typically steak, olives, onion and one boiled egg. Artery cloggingly amazing!!

The remainder of ride down is a heap of fun; Victor and Felipe are so pumped the whole time - they can't stop singing and laughing! We stop off at Felipe's parent's house on the way - they live in a quaint stone house surrounded by a small nut orchard which they run full-time. I'm simply blown away by their hospitality; they are such genuine and friendly people, despite speaking roughly 0% English (and my Spanish not much better) they welcome me into their home like family and force-feed me food and bottomless cups of coffee. We load the car up with even more beer and wine at a local tienda (you can get a decent bottle of red for around $4!) and we're on our way.

A roaring campfire greets us when we roll into our campsite at Pichilemu in the late evening - we're perched on the top of a hill in a paddock overlooking the small town. It's surprisingly similar to the east coast of NZ - rolling green hills with macrocarpa trees dotted along the fencelines and vast pine plantations stretching into the distance. We have a mixed bag of Chileans and other nationalities at the camp (most of them work at the hostel) - the one problem I have is that they're all speaking Spanish!! I'm stoked on this situation as it gives me the perfect opportunity to learn more than my current arsenal of a few basic words. 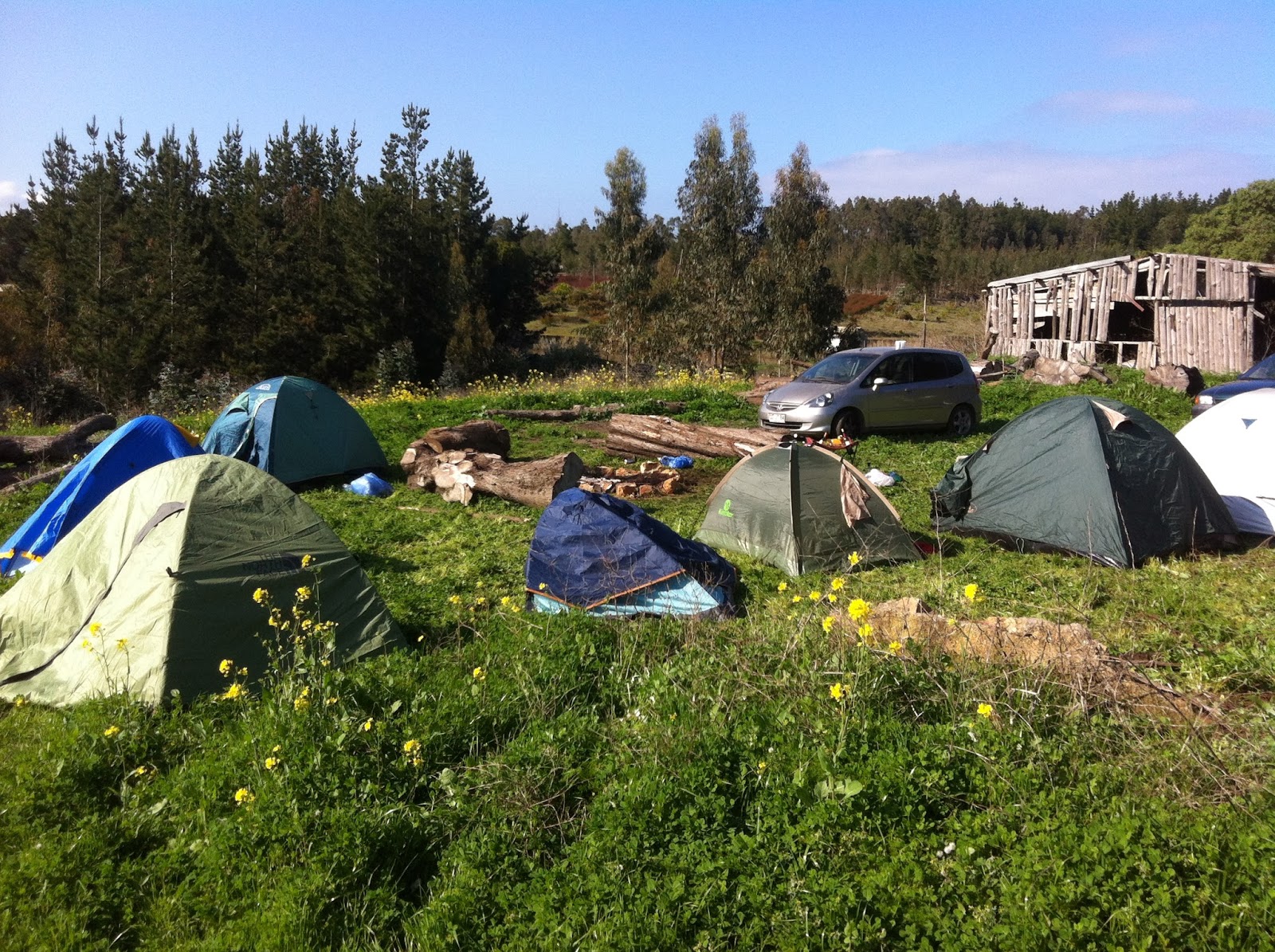 I quickly learn that the Chileans party hard - these guys crank the tunes until the early hours, then after a few hours rest the beers are flowing and the meat is sizzling on the open fire grill again by mid morning. After a couple of nights of this I think it's some form of sinister revenge when one of the neighbours cranks up his skillsaw right beside our campsite around 7am - peak hangover time! To add insult to injury I've come down with some form of food poisoning.. I've got cold sweats and I'm retching my guts out all day while trying to find the balance between the hot sun and the freezing wind blowing straight off the frigid Pacific Ocean.

One evening we head to the Afonda - a huge party under a giant marquee in the centre of the town. Buckets of Corona on ice, Piscolas (a local brandy called Pisco with Coca Cola on ice), and the infamous cocktail 'Terremoto' (earthquake) were flowing freely.
One of the novel things about this experience is that other than the crew I'm with, I only see a handful of other gringo tourists over the entire week. At times it feels like I'm a one-man travelling freak-show. Walking down the street people routinely stop, stare, point and blatantly take photos of me as they walk or drive past.

There's a point break in town, La Punta, a long left which has been a bit raw and bumpy but it really turns on one arvo. It's absolutely pumping!! I race back up to the campsite to grab my gear; Victor and I suit up and paddle out. The empanadas and drinking catch up with me and I get the the biggest beating I've had in South America. Set after relentless set pound the crap outta me, grossly exacerbated by the hand and feet numbing 11 degree water! I'm wearing a hood and booties but I'm losing so much heat from my thin 3/2 wetsuit I can hardly surf!

With the festivities over, my amigos heading back to Santiago and a new swell on the charts it's time to settle into surf mode again. I check into Pogue's cabanas, +56 92147649; a sick little hostel run by US ex-pat Anton Pogue, an ex-pro snowboarder and keen surfer with the energy of a stoked grommet! It's located within walking distance of Punta de Lobos (five mins drive from the town in Pichilemu) with very cheap rates at five 'luca' (5000 pesos) per night - approx $10USD.

He's fully booked when I show up but he kindly lends me a tent to pitch under a tree in his yard. If you're ever in Pichi and trying to find him just look for the dude with the big blonde afro! I'm rudely woken in the early hours - my heart races as I come to the groggy realisation it's an earthquake - a stark reminder of the seismically active nature of this part of the world (in 2010 Chile was rocked by a monster 8.8 quake and a large tsunami. It was the sixth-largest quake ever recorded on a seismograph - centred not far from here). 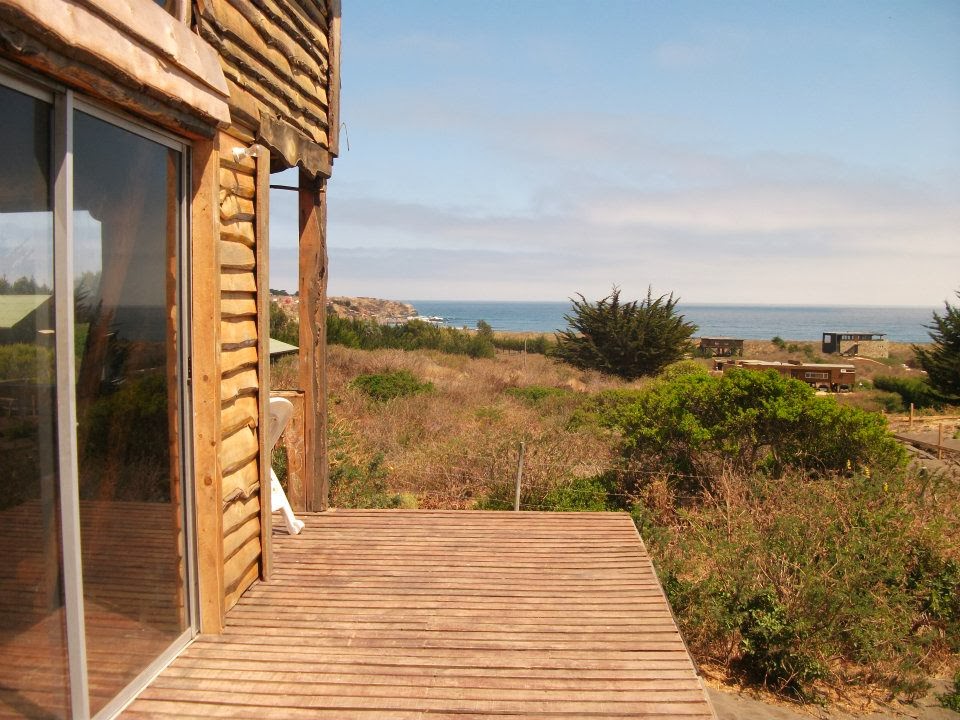 One of Anton's beach shacks at Pogue's Cabanas

The surf gets pretty solid one day - necessitating the 'rock jump' at the end of the point. You weave your way down through the cactus-lined goat track to the rocks at the bottom, wait for a break in the sets and run like hell jumping off the rocks into the water, paddling like a man possessed through the keyhole gap in the rocks before the next set rolls in. Super intense with potentially hairy consequences, but shitloads of fun! 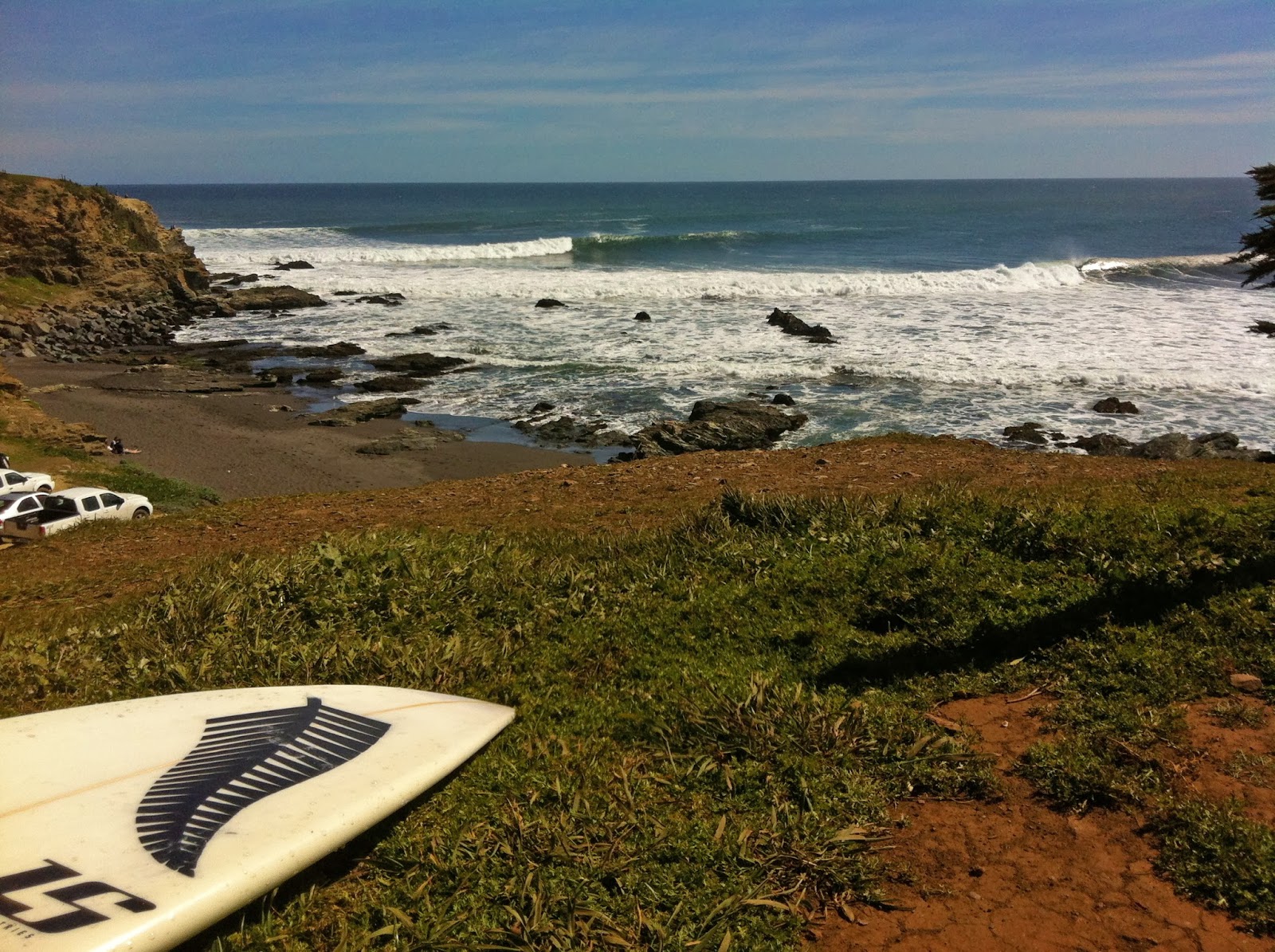 Bigger and much colder than it looks!!!

The waves are double overhead and I'm severely under-gunned on my little 5'8" JS Blackbox. I drop into my first wave and it's basically survival surfing mode, desperately trying to hold a rail to stop my board sliding out and getting smashed. I've got a fleece-lined rash shirt on under my wetsuit, which helps a little against the cold but I can only get about 40mins in before I can no longer hold my numb fingers together as I paddle. When it gets to this stage I'm trying to 'claw-paddle' to hold position against the current sweeping down the point. I've got a nasty friction rash under both armpits that is worsening every surf. The constant paddling and the piercing cold makes my kidneys feel like they're in a vice. My pits are literally rubbed raw and it's only going to get worse if I keep surfing - I vow to return and make the call to head to Argentina early!